Introduction
Graffiti and street art is an anonymous tool used to express yourself and your point of view on on almost anything, including politics, personal expression, culture etc. Graffiti is gaining popularity and people are being more creative and expressive with art form.
Political Graffiti:
When a graffiti artist paints or gives their point of view on politics they usually like to stay anonymous. That's because people may have a different opinion to the one expressed in their work, due to race, sex, culture ect. Take Banksy for example, (learn more about Banksy on page 5) he/she is expresses himself and his point of view on politics and life. Political graffiti does not always have to be about politics itself, but it can also be your point of view nature, the finical world and just life in general. 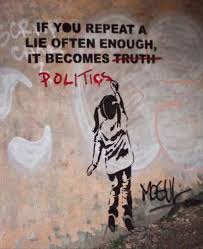 Fame and Popularity:
Graffiti artists create tags, signitures and noticeable features in their work to gain a reputation and a graffiti style. Fafi a French graffiti artist gained fame over time and now she has worked with M.A.C makeup to create her very own graffiti inspired make-up line. Just like celebrities, graffiti artists sign brand deals  to gain fame and popularity. In the 21st century graffiti is gaining more respect from the public so theres more of a chance to make a living of graffiti, murals and street art. 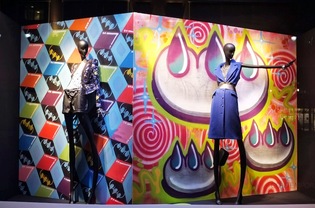 Claw (a graffiti artist) started her graffiti lifestyle painting the streets of New York. She painted her logo (a claw) all over New York, and now has her own fashion brand that has became popular with many celebrities such as Nicki Minaj and Rihanna.
Expression of the Self:
Unlike political graffiti, some graffiti may not have a significant meaning to the public or serve any social purpose. Graffiti may be created to express personal meaning or simply be a tool for people to express individual concerns, thoughts, feelings, etc. To create graffiti in this way may be meaningless to some, but it may hold a secret meaning that may be special\meaningful to the artist. This type of graffiti is usually consists of words or a sentence rather than a image or mural. 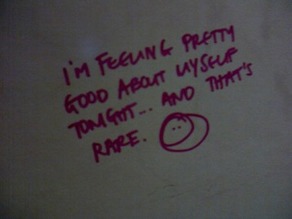 "I'm feeling pretty good about myself tonight...and that's rare."
Cultural Graffiti
Graffiti is used to express your point of view, concerns, feelings etc. But it can also be a tool to express your nature and or religion. When graffiti first became popular around the same time as the Civil Rights Movement (1950's and 1960's), people wanted to be accepted for what colour, race sex etc they were. Going back to political graffiti people wanted to have a voice. Racism is sadly still a part of our lives, so graffiti lets people share their point of view on this topic (positive or negative).

Combo is a Muslim graffiti artist who shares common facts about Muslims through graffiti to explain to the public that muslims are not that different from the rest of the public.
Humorous Graffiti
Humorous graffiti is just for the enjoyment of the artist and the public. This graffiti may be making fun of, mocking or just messing with a person's painting or evan a certain gender or race. Some may find this style of graffiti offensive and others may consider it a waste of public space. None the less humorous graffiti is one of the most fast growing graffiti styles around the world. 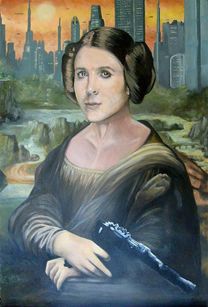 This piece of graffiti is a parody of the 'Mona Lisa', a famous painting done by Leonardo da Vinci. This graffiti piece is called 'The Mona Leia', a reference to the
Star Wars character Princess Leia.﻿
By: Hannah Depta